When your Brittanys Fight

What to do when your Brittanys fight. 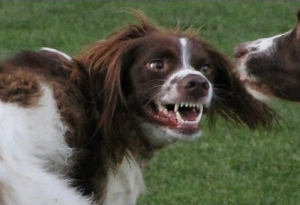 Brittanys that live in social groups establish a social structure within their pack. This social structure is hierarchical and your Brittany will determine their place in the hierarchy through control of and access to various resources, such as food, toys and attention from people. A stable hierarchy in which each individual knows and accepts his rank provides your Brittany with a sense of comfort and belonging. Conflicts arise between household dogs when there is instability in the social structure; that is, when the ranking of each dog is not clear or is in contention. Brittanys may warn each other initially by snarling, growling or snapping, but not causing injury. However, the conflict may sometimes intensify into prolonged bouts of dangerous fighting, which may result in injury.

Conflicts between household dogs develop for a wide variety of reasons.
Conflicts may occur if:

The dogs’ positions in the hierarchy are determined by the outcome of their interactions. The results of this complex and dynamic process will depend on the dogs themselves, without regard to your preferences. Any attempt on your part to interfere may result in increased conflict.

How dominance is established

Dogs usually determine their social ranking through a series of behaviors, which include body postures and vocalizations that don’t result in injury. Examples of these behaviors are one dog “standing over” another by placing his paws or neck on the shoulders of the other, mounting, lip licking or rolling over onto the back. Some dogs may take toys away from other dogs, insist on being petted first or exercise control over other resources. However, because of past experiences, inadequate socialization or genetic tendencies, some dogs may escalate these displays into aggression with very little warning.

Do not attempt to influence or define the dogs’ rankings by treating them equally or by preventing a higher-ranking dog from asserting his position over another dog. The social hierarchy of the dogs is dynamic and complex, so even attempts to “support the dominant dog” may be counter productive. The dogs should be allowed to determine control of resources, such as toys and favorite sleeping places, amongst themselves. As much as possible, refrain from interfering in the dogs’ interactions with each other. But most importantly, establish yourself at the top of the hierarchy as the pack leader.

Practicing “Nothing in Life is Free” is an easy and non-confrontational way to establish leadership by taking ultimate control of all resources your Brittanys find valuable. If your position as leader is clear, it will help them sort out their lower places in the social structure more peacefully.

Breaking up a fight

What you can do to help