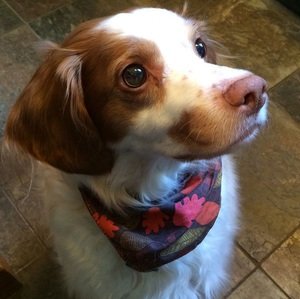 As told by Madison, a much loved BRIT Foster Mom.

It was one night in December during our bedtime treat ritual that we first noticed something unusual.
Maple, our five-year-old Brittany, usually caught the treats in her mouth when we called out her name and tossed them towards her. But tonight the treats sailed past her head and into the mouth of our other dog. At first we didn’t make much of this observation, writing it off to poor lighting or distractibility. But this was the first sign that things weren’t quite right with Maple’s eyes.

Maple had a tough autumn.
She had moved from Texas with her Mom to be with her Dad who lives and works in Tennessee. Maple underwent some doggie stressors when she moved, struggling to incorporate into the Tennessee dog “pack” which was already well established in her Dad’s home. Over the fall months Maple became increasingly lethargic and withdrawn. She ballooned in size gaining at least 7 lbs. We were worried that Maple might be depressed, and considering the new situation at home, this seemed reasonable. But none of us wanted to start Maple on an antidepressant… not our dog. Instead we prescribed for her more walks, more treats, and more love.

As the winter went on, it was obvious that Maple was struggling with more than depression. She was bumping into furniture and hesitating to walk down the stairs. Her pupils were dilated, too. We took her to the vet who performed an ophthalmologic exam, looking into the backs of Maple’s eyes to check her retina.

The vet was concerned about Maple’s eyesight. It had taken us a while to notice what was now becoming obvious: Maple had lost her vision. Maybe not all her vision, though. Maybe it could be saved, we thought. Our family clung to hope as we waited several long days to see the veterinary opthalmologist.

The ophthalmology office was beautiful and full of happy dogs and their people. Many of the dogs were blind, we were told. Still it seemed like we didn’t belong there. Maple was our dog-child, our “first born,” the first perfect bundle of love that we as a couple had shared. We didn’t believe this couldn’t be happening to us. We didn’t want to consider that Maple might be going blind.

But it was happening to us. An electroretinogram confirmed that Maple had lost her eyesight entirely. The veterinary opthalmologist was apologetic and understanding. In fact, she delivered the bad news with more empathy than most of the physicians with whom I’ve worked (I am a medical student).

In her veterinary ophthalmology office in Nashville, Dr. Voyles diagnosed Maple with Sudden Acquired Retinal Degeneration (“SARDs” for short). Based on her dilated pupils, poor eyesight, the electroretinogram, and the examination of her eyes with the opthalmoscope, it seemed clear that Maple was suffering from SARDs. SARDs is a rare cause of sudden permanent blindness, and the underlying origin of the disease is unknown. Blindness may develop over days, weeks or months, but little can be done to treat the disease once it has begun. Maple’s was a “textbook” case, we were told. Her symptoms began in the fall when dogs are more likely to develop SARDs, and leading up to the diagnosis she had many of the common symptoms such as weight gain and lethargy. Click here to learn more about SARDs.

The vet, with her excellent bedside manner, also gave us some good news. Other than the associated lethargy and weight gain preceding blindness, SARDs only affects the eye. We were assured that Maple should have a normal lifespan. And unlike cataracts or glaucoma SARDs does not require surgery and it also does not cause pain.

The vet warned us that the owners usually have a much harder time than the dog itself. We found a wealth of information for blind dogs, and with it hope and support for blind dogs and their people. You can access our favorite of these resources here.

Maple likes this bed right in the middle of everything.
I think it helps her to be immersed in the high traffic area of all the dogs and people.

Maple doesn’t seem to be bothered by her blindness nearly as much as we originally were. Our family was sad for weeks after learning that Maple was blind. I think Maple’s depression improved even before ours did! To come to terms with Maple’s blindness, we did a lot of reading and considered second opinions, alternative diagnoses, far-fetched treatments, and the like. Our vet was very open to other possibilities, even encouraging us to research unusual treatments and clinical trials if we decided that we should “do everything” to save Maple’s eyesight. In the end, though, it seemed obvious that there was no eyesight left to be saved. We ultimately found peace in the diagnosis, comforted that there would not be complications later on down the road.

At first we had to make adjustments like adding railings to the stairs. We have learned cues to help her in public, like saying “step” before we step up a curb or down the stairs of the porch. Maple now wears a “I am blind” tag on her collar. Surrounded by her fellow dogs she is able to use her hearing and smell—for dogs, smell and sound are the most prominent senses, unlike humans who rely heavily on sight. In the house, it is hard to tell that Maple is blind. Occasionally she bumps into things but it is never a big deal. She’s even cuter than before…bumping into things is quite endearing.

And thankfully, Maple is back to her happy little self. Since December her spirits have lifted and she has dropped a few pounds. It even seems like Maple listens better now, knowing that she can’t be an ornery Brittany and run amok (or at least not all the time). She may not be able to see but Maple is still our perfect little angel, cute as ever.