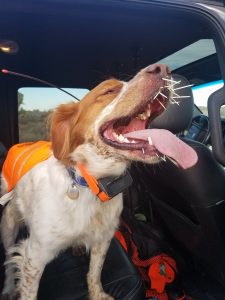 My two Brittanys, Maggie & Merlin, got settled down by the time we reached the ponds and working around the north side they had success finding a pheasant, but it flew behind the lone tree which didn’t provide a clear shot.  I did pay attention and got a good mark where it landed on the other side. We continued working around the pond and were in the vicinity of where the bird landed.  The dogs were getting excited on the outer edge of the cat tails and I positioned myself for the shot as they found a path into the cover.  Suddenly Maggie and Merlin began barking and I knew it wasn’t a bird!
Sun was out, temps in the mid 50’s, the wind was about 5mph and I was done working for the day so the dogs decided we should go find some birds.  Got dressed down, dogs geared up and guns loaded before doing the 5-minute drive.  I had an area picked out in the Potholes Wilderness area which consisted of some trees and dried up ponds surrounded by cat tails.  It sure looked like a place for birds to take refuge from the wind.

The cat tails were so thick that any attempt to get through only produce a mouth full of fluff.  I saw what looked like a way through and it only led into more cat tails.  Suddenly one dog and then the other yipped which wasn’t a good sign.  I didn’t hear any rattling to tell me snake and I took a good whiff which said no skunk.  The Potholes Wilderness area covers 8000 acres which is home to lots of wildlife as small as quail and as large as mule deer.  The only thing that ran through my mind was to get the dogs recalled and away from whatever it was. 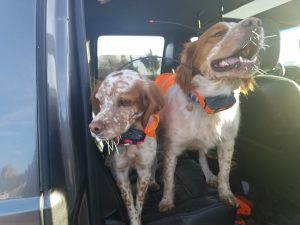 Yes, I’ll admit this is where my lack of situational experience failed me.  I could try to put the blame on the dogs or the situation, but it all boiled down to the excitement of the moment and not being mentally prepared for the moment.  I had the gear that included an Alpha 100 with TT collars, a whistle used to recall the dogs, leashes for both dogs.  The dogs are not the best trained, but under most circumstances they obey me.  By now I’m sure you are already thinking that you would do this, or you would do that, but unless you practice some of this and that it doesn’t work so easily.

After another yip from a dog, I managed to get Maggie out and it looked like she had a mustache and goatee of porcupine quills.  She sat and stayed as told but went back in for another round once I moved away from her to get Merlin.  I could only guess what was happening on the other side of the thicket even though we just had an encounter in the back yard 2 weeks previously as a porcupine decided to spend the day in our willow tree before leaving in the dark of the night.  I was able to get Maggie out again, this time putting her on a leash and the only thing available was tying it off to my shotgun.  Merlin on the other hand was having problems getting back through the cat tails.  On the Alpha 100 it could be seen how he was moving back and forth, but the porcupine must’ve been blocking the original path.  Grabbing my gun and Maggie’s leash we began heading back toward the truck as I kept calling Merlin.  He finally found a way through and we stopped so he could catch up.  Just like Maggie, he was adorned with the same presents. 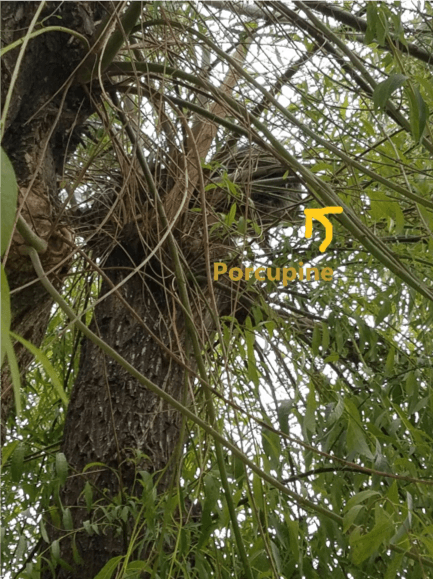 At the truck I worked on pulling several quills out of Maggie’s upper lip, which is why she doesn’t look as bad off as Merlin in the picture.  Then we headed off to the Vet’s office.

The moral of this adventure is, be familiar with the equipment you use and make plans for what could possibly happen.  Do the “what if” drill and figure out a plan to minimize damage that might be caused.  In this case I should have leashed Maggie the first time she came out.  I should have been more familiar with the Alpha 100 with TT collars and could have zapped them when they didn’t back away from the porcupine on the recall.  I should have been carrying pliers in my vest to use instead of getting stuck several times attempting to pull out quills.

Good luck on your next hunt!

Maggie and Merlin are 3-year-old French Brittany’s / Epagneul Bretons representing the small and large ends of the breed.  They aren’t the best trained, but they are part of our family.

We have fun hunting quail and pheasant which are plentiful in our area.  We live in Moses Lake, WA right next to the Potholes Wilderness area making it very convenient to run, play or hunt at almost any time. 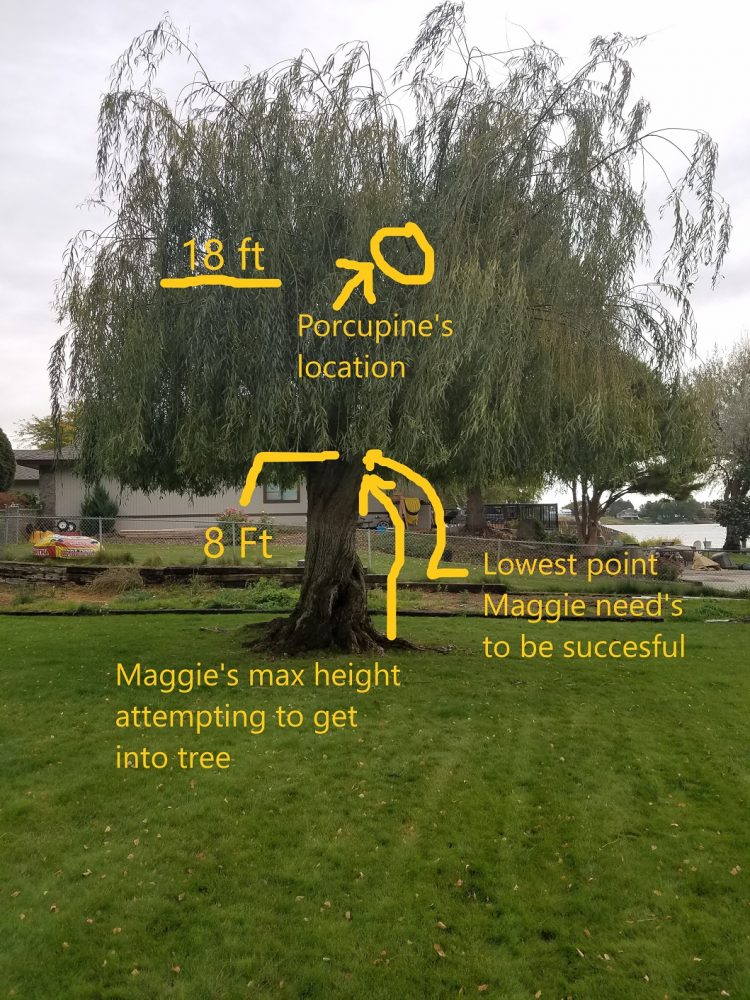