Introducing your Brittany to your other dogs

How to introduce your new Brittany to your resident dog. 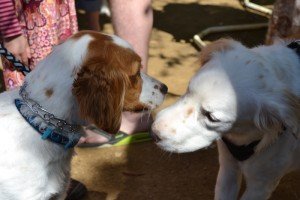 Animals that live in groups, like Brittanys, establish a social structure within the group called a dominance hierarchy. This dominance hierarchy serves to maintain order, reduce conflict and promote cooperation among pack members. Brittanys also establish territories, which they may defend against intruders or rivals. This social and territorial nature affects their behavior when a new Brittany is introduced to their household.

Introduce the dogs in a neutral location so that your resident dog is less likely to view the newcomer as a territorial intruder. Each dog should be handled by a separate person. With both dogs on a leash, take them to an area with which neither is familiar, such as a park or a neighbor’s yard. If you frequently walk your resident dog in a park near your house, she may view that park as her territory, so choose another site that’s unfamiliar to her.

From the first meeting, you want both dogs to expect “good things” to happen when they’re in each other’s presence. Let them sniff each other, which is normal canine greeting behavior. As they do, talk to them in a happy, friendly tone of voice – never use a threatening tone of voice.

Don’t allow them to investigate and sniff each other for a prolonged time, as this may escalate to an aggressive response. After a short time, get both dogs’ attention, and give each dog a treat in return for obeying a simple command, such as “sit” or “stay.” Take the dogs for a walk and let them sniff and investigate each other at intervals. Continue with the “happy talk,” food rewards and simple commands.

3) Be Aware Of Body Postures:

One body posture that indicates things are going well is a “play-bow.” One dog will crouch with her front legs on the ground and her hind end in the air. This is an invitation to play that usually elicits friendly behavior from the other dog. Watch carefully for body postures that indicate an aggressive response, including hair standing up on the other dog’s back, teeth-baring, deep growls, a stiff legged gait or a prolonged stare. If you see such postures, interrupt the interaction immediately by calmly and positively getting each dog interested in something else. For example, both handlers can call their dogs to them, have them sit or lie down and reward each with a treat. The dogs will become interested in the treats which will prevent the situation from escalating into aggression. Try letting the dogs interact again, but this time for a shorter time period and/or at a greater distance from each other.

When the dogs seem to be tolerating each other’s presence without fearful or aggressive responses, and the investigative greeting behaviors have tapered off, you can take them home. Whether you choose to take them in the same, or different vehicles, will depend on their size, how well they ride in the car, how trouble-free the initial introduction has been and how many dogs are involved.

If you have more than one resident dog in your household, it may be best to introduce the resident dogs to the new dog one at a time. Two or more resident dogs may have a tendency to “gang up” on the newcomer.

Puppies usually pester adult dogs unmercifully. Before the age of four months, puppies may not recognize subtle body postures from adult dogs signaling that they’ve had enough. Well-socialized adult dogs with good temperaments may set limits with puppies with a growl or snarl. These behaviors are normal and should be allowed. Adult dogs that aren’t well-socialized, or that have a history of fighting with other dogs, may attempt to set limits with more aggressive behaviors, such as biting, which could harm the puppy. For this reason, a puppy shouldn’t be left alone with an adult dog until you’re confident the puppy isn’t in any danger. Be sure to give the adult dog some quiet time away from the puppy, and perhaps, some individual attention as described above.

When To Get Help

If the introduction of a new Brittany to a household doesn’t go smoothly, contact a professional animal behaviorist immediately. Dogs can be severely injured in fights, and the longer the problem continues, the harder it can be to resolve. Conflicts between dogs in the same family can often be resolved with professional help. Punishment won’t work and could make things worse.