As told by her Dad, Shane 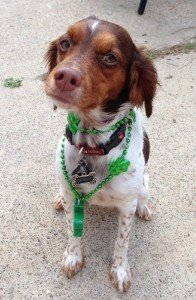 On March 3, 2012, I traveled north (toward Dallas) from Houston to meet Pattie with BRIT and my soon-to-be little Brittany girl (“Ginny”) for the very first time. Like a proud Poppa, I held my Ginny for the first time. A little tri-colored girl who weighed just under twenty pounds. She spent her days with me most of the time. I hired a girl to come walk her and play with her on the days I couldn’t take her to the office with me. She snuggled under the covers with me at night.

I never could get her to gain weight and I chalked it up as a girl full of energy.  She would go hide under the bed or in the back of the closet sometimes. I would go look for her and she would poke her head out from under the bed and wag her nubbin. We went for walks and she loved to go for rides in the car. She would occasionally pee on the floor in the kitchen. I was often frustrated that she didn’t tell me she needed out. Looking back I feel so bad that she couldn’t hold it, she couldn’t process liquids like a normal little girl.

At the end of 2012, I started dating a nice girl, Erica, and Ginny agreed that we should keep her. (We’re now engaged to be married J) Erica loved Ginny as much as I did – which made me very happy. Erica thought Ginny needed a brother. We contacted BRIT and brought home a boy named Milo. He was such a good boy that that we felt Buddy was a name that was better suited to him. Buddy and Ginny played and chased each other around the yard constantly. 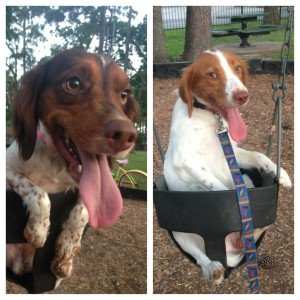 On Monday, January 27, 2014 when Erica was taking the dogs for a ride in the car Ginny vomited. This was unusual for her. Tuesday she vomited again and we called the vet. We had an appointment set up for 8 o’clock Wednesday morning. Tuesday night she looked like she could not balance her she and we opted to rush her to the emergency vet. The doctor stated that she was jaundice when she arrived with a slow capillary refill time.

After running blood work it was determined that her liver functions were elevated. After x-rays were taken it was discovered that she had an unusually small liver. The doctor said she apparently had a liver shunt. This is a vein that bypasses the liver not allowing it to develop fully and giving her the petite conformation and the inability to gain weight.

After two days the doctor was no longer able to control her levels and we had to let her go. I miss her dearly.

Liver Shunts are usually found in small dogs that have been inbred and are not common in the Brittany breed. We could have controlled this with medicine and a strict diet but we missed the signs. If I would have had x-rays and a blood panel done on her earlier in her short life I would have known. Many may think that the $400 that one would spend for x-rays and a blood screen to establish a baseline for your pup is excessive but in two days Erica and I spent close to $2500 trying to save her and would give much more to have her back.

I asked Pattie if I could write this article because I wanted my whole BRIT family to look for these symptoms in their babies. If I knew what to look for I would still have my girl.

I am not an expert, but I put this information together as best I could to share with the BRIT community. Please do your own research and talk with your veterinarian with your concerns.

As most of you are aware, the liver is an amazing organ. It performs a whole host of important functions in the body, among them:

So the liver is a phenomenal organ which requires a consistent flow of blood to and through it to do its job effectively.

The presence of a liver shunt in your pet means the blood flow to and through the liver is compromised.

There are two primary types of liver shunts:

Liver shunts are typically a problem of dogs, though cats can also have the condition.

A liver shunt called the ductus venosus is actually a natural development while a puppy is growing inside the mother’s uterus. Interestingly, during gestation, puppies’ livers aren’t functional. The mother’s liver carries the detoxification burden for her body and her litter while in utero.

Toward the end of gestation, the ductus venosus is supposed to close, insuring the puppy’s liver is functional at birth. If the shunt doesn’t seal itself off before birth, the puppy is born with an open shunt called the patent ductus venosus which is an intra-hepatic shunt.

An extra-hepatic liver shunt is a genetic anomaly in which the blood flow to the liver is rerouted by an abnormal blood vessel outside the organ.

This type of shunt also develops in utero. Even though the ductus venosus closes as it should prior to birth, the shunt outside the liver remains open, compromising blood flow to and through the dog’s liver.

Symptoms of the presence of a liver shunt are also symptoms of a poorly or non-functioning liver.

The liver’s job is to distribute protein so the puppy can grow, and also to detoxify the blood. A puppy with a shunt will show signs of toxicosis from central nervous system depression. Symptoms can include:

In very serious cases, toxins in the blood cross the blood-brain barrier resulting in seizures and other significant central nervous system crises.

Another sign of the presence of a liver shunt is failure to thrive. A puppy that isn’t thriving will have lack of physical growth, poor muscle tone, a tendency to sleep a lot, and will generally appear lethargic and underdeveloped compared to his littermates.

The diagnosis of a liver shunt can be difficult. Failure to thrive in puppies is a tip-off, but often in milder cases, there aren’t clear cut signs of the condition.

Blood test results that can point to the condition include a low BUN (blood-urea-nitrogen) level, which is a measure of kidney function. Another tip-off is low albumin, a type of circulating protein. Liver enzymes such as ALT and AST might be elevated, indicating damage to the organ.

The best measure on traditional bloodwork of a possible liver shunt is a liver function test called bile acids.

Bile acids are produced naturally by the liver and are stored in the gallbladder. They are secreted as necessary by the gallbladder to help your pet’s body process fat. They are then absorbed through the small intestine and recycled back to the liver.

If the liver doesn’t have the blood flow necessary to recycle bile acids, the level will be very high in bloodwork. Normal bile acid values are under 20. Elevations, especially levels over 100, can give a good clue that a dog is suffering with a liver shunt.

At my Natural Pet Animal Hospital, we require pre-anesthesia bloodwork on every pet. I encourage you to insist your vet do the same. Many dogs are spayed or neutered at six months of age, and many vets don’t do pre-surgery bloodwork to check organ function on animals that young.

It can be a rude awakening to the presence of a liver shunt when it takes your beloved pup two or three times as long as it should to come around from anesthesia, or worst case scenario, he doesn’t survive the experience. The liver is the organ that has to process anesthetizing drugs, and if it doesn’t have adequate blood flow, your pet’s body can’t efficiently manage those drugs.

This is an unfortunate way to discover your pet has a liver shunt. Pre-anesthesia bloodwork is a proactive and much safer way to go.

Whether your pet is a puppy undergoing anesthesia for the first time or an adult dog, I recommend annual blood tests to insure liver function is adequate to handle anesthesia and other drugs.

The only absolutely definitive method for diagnosing a liver shunt, and to determine whether it is intra- or extra-hepatic, is through an MRI, CT scan, portography (a test which looks at blood flow to and through the liver), ultrasound, or exploratory surgery.

I only recommend you spend the extra money for those tests if your pet’s quality of life is clearly compromised.

If your puppy is having central nervous system symptoms or is failing to develop normally, you may have no choice but to consider these diagnostic tests. This is especially true if your pet’s quality of life continues to unravel and you’re faced with the possibility of euthanasia.

The diagnostic tests I mentioned will show your veterinarian exactly what the problem is so you can consider the possibility of a surgical solution.

Surgery is the best option for many liver shunt cases. Unfortunately, intra-hepatic shunts have a less successful prognosis than shunts outside the liver. Intra-hepatic shunts are difficult to correct surgically and have more post-surgical secondary complications.

Extra-hepatic shunts usually can be easily fixed with surgery and could be your pet’s best option depending on her symptoms and quality of life.

If your dog has been diagnosed through proactive bloodwork with a probable liver shunt, but she seems healthy and looks fine, there are things you can do to help manage blood flow impairment to the liver.

These tools include nutraceuticals and herbal compounds that aid detoxification such as:

There are also some very helpful homeopathic and Chinese herbal medications that aid blood detoxification. I recommend you find a holistic/integrative veterinarian who can tailor a supplement program to meet your dog’s specific health needs.

Another very important aspect of managing your pet’s liver shunt condition is nutritional therapy. Your dog, as a carnivore, must eat protein for his well-being. Since his liver, the organ which processes protein, is impaired, it’s necessary to reduce protein intake.

It’s important to understand that you don’t want to entirely eliminate protein from a carnivore’s diet, or your dog will develop serious health problems related to hypoproteinemia (protein deficiency). But you do want to feed a reduced amount.

My frustration with many of the commercially available diets for dogs with liver conditions is that while they do contain a lower percentage of protein, the quality of that protein is terrible. It is from rendered meat, not human grade. It is difficult for your dog to digest and has minimal bioavailability because it is of such poor quality.

I recommend you feed a dog with hepatic impairment a homemade diet. You should partner with a pet nutritionist in this effort, because it’s important to meet all your pet’s nutritional requirements for vitamins, minerals, antioxidants and fatty acids. Diets designed for liver patients should have a reduced amount of both protein and minerals. A reduction in minerals will reduce kidney stress and the risk of bladder stones, a common condition in dogs with liver shunts.

Together with a holistic vet and a pet nutritionist, you can create a plan for proper supplementation and a balanced, lower-protein, homemade diet that can help your dog live a long, wonderful life despite her liver abnormality. 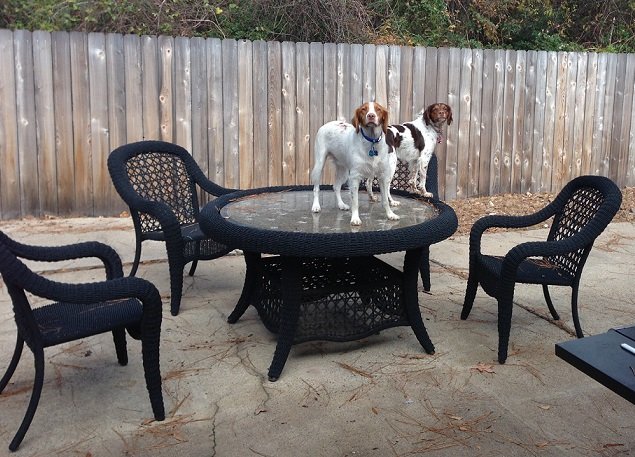