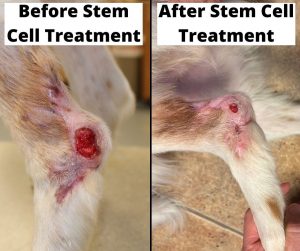 Wilson is a beautiful young Brittany with a diagnosis of Grade 2 (of 3) sarcoma cancer on his left hind leg. Surgery was done at another clinic in late July 2021 to remove the sarcoma tumor. According to the pathology report, the tumor was not completely excised microscopically. The tumor was too large on the location on the leg to remove completely without further damage to the leg and complete closure of the incision was not possible.

Without further treatment, there is concern the cancer will return and it was previously suggested the leg be amputated. We will try to save his leg by using Anicell stem cell product to fight the sarcoma cancer. 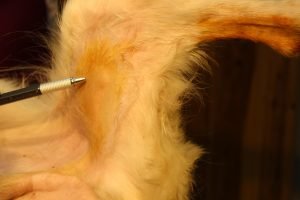 UPDATE – Vet’s notes from 9/30/21:
“Wilson was doing much better on his left rear leg (the leg where the original cancer was removed) after the stem cell injections. The open incision was healing, and he was using this left leg to run and play.
Yesterday he had another surgery on the inside of the same leg to remove another nodule and hopefully all of it’s “margins”. He is now lame again yet understandibly. We also injected the leg again with stem cell solution again at the old site and at the new site. We have high hopes!”

Update 10/15: The biopsy of the nodule showed NO CANCER! 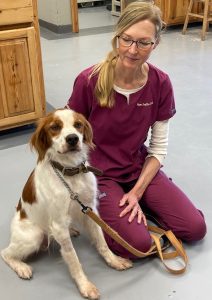 Update 11/18: Dr. Saliba’s update, “I walked Wilson today for his noon walk. He was vibrant and active. He is eating well and maintaining his weight. He is able to jump very high and is using both back legs evenly. I palpated the scar from where his tumor was removed and it feels very smooth; I do not feel as if there is regrowth of the tumor at all. I palpated the area where the lymph node was removed on the medial aspect of the leg and it feels normal. We do not have a protocol for when or if the Anicell (stem cell) product is to be used again. Close monitoring of the leg would be prudent.” 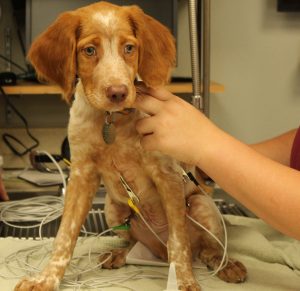 ​Ruger is a vibrant, active, growing 15 week old puppy. Ruger has been previously diagnosed with a cardiac arrhythmia. Currently, an ECG is being done to screen for the accuracy of this diagnosis. Once this has been noted, Ruger will be seen by an internal medicine specialist and ultrasonographer. His fee for an initial echocardiogram will be $800. He will assess the cause for the arrhythmia and ultimate prognosis and therapy. He will then quote for those fees.

UPDATE – Vet’s notes from 9/30/21:
Good news – the cardiologist says Ruger’s echocardiogram is NORMAL (hurray!). Going forward, his vet will need to monitor for abnormalities during his semi-annual vet visits. So far he looks good and is almost ready for his forever home.

Update 10/15: Ruger is now in his forever home and thriving!