A Tale Of Two Brittany Sisters 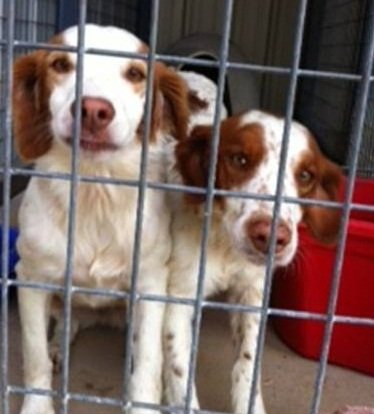 On August 31st BRIT went to a home to take in two owner surrender Brittanys, we took pictures, posted them on our website and the owner filled out Surrender Contract. He agreed to keep the girls until we could place them. They had a beautiful home on 8 acres and would be fine there until we found them a home.

These sisters had a very sad story. Their human mom passed away several months earlier. She had owned Brittanys for the 30 years they were married and they were her babies. The widower was grieving and could not take care of the sisters so he banned them from the house to roam the 8 acres.

On October 3rd BRIT received emails, many (many) phone calls, text messages that there were two female Brittanys at the Weatherford shelter … and also messages that someone had found two female Brittanys. We contacted Wayne who had emailed and called me about the two Brittanys who were “dumped” across the street from his home in Brock. (They never were in the shelter, he had sent pictures of them to the shelter so they could post these lost girls.) We talked for a few minutes and I asked him if I could send him a few pictures. When he saw the girls’ pictures, he said those were the two Brittanys he had! Oh my gosh – they were about 20 miles from their original home.

I immediately called the owner and asked him if his Brittanys were missing and he said “No, not really.

Dakota was digging in the neighbor’s septic tank and she threatened to sue me so I took them out to the country.” Needless to say, that was the END of the conversation. I called Wayne and asked if he and Dorothy could foster these girls until we could find them their forever home – together. They graciously and more than willingly took in Charo and Dakota. You see Wayne used to raise Brittanys many years ago and loves the breed. (Aren’t Brittany people just the best?)

If Charo and Dakota “had” to be dumped, what better place than across the street from Wayne and Dorothy’s home. They fed the girls, loved them, even took Dakota to the vet several times for a tick that was imbedded above her eye.

BRIT went on the hunt for the perfect home for these two special Brittanys. We all agreed with Wayne and Dorothy that they absolutely had to be placed together. Not everyone can take in two Brittanys, but after about a month we found the PERFECT home for them. 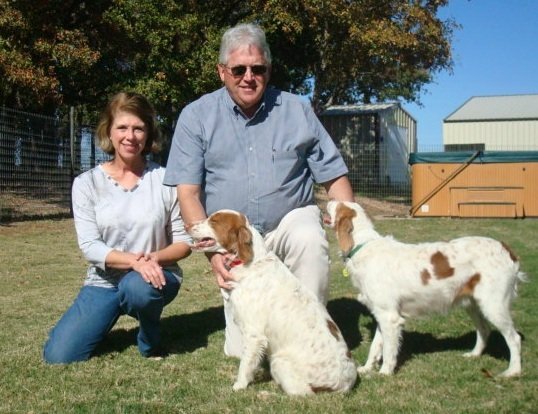 That’s where Laura and Bill came into the story. They were previous BRIT adopters and provided a wonderful home for Brittanys. Though they weren’t sure about two at one time, once they met Charo and Dakota and saw how attached at the hip they are, they knew that they were going home with them.

Charo and Dakota now have a wonderful new forever home with a Mom and a Dad, great back yard, get to live in the house (again) and all the love these Brittany sisters deserve! 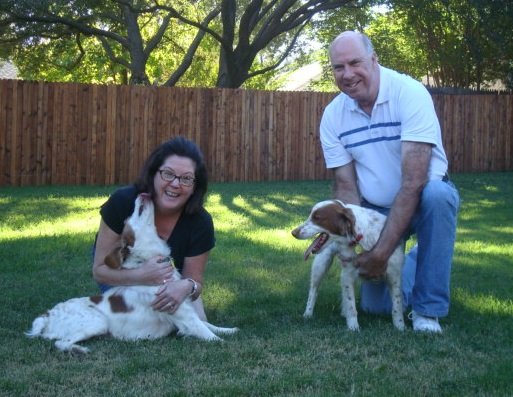 Many thanks to everyone who contacted BRIT about Charo and Dakota! And a loving and heartfelt thank you to Wayne and Dorothy for being such wonderful people, loving the girls and taking such awesome care of them. More thanks to Dr. Pam @ La Paloma Small Animal Hospital for bringing them up to date on all their shots and microchipping them. And a special thank you to Attorney Raed Gonzalez for his incredibly generous donation for the care of these girls and for the work that BRIT does.